Traditional BaZi Reveals Who Would Make A Better President

On 9th Nov 2016, while watching the elections for the next US president, I had decided to take a look at both  candidates BaZi charts to see who was likely to win. The impact on the financial markets were huge when Trump seemed to be leading. The Dow and all other markets were plunging, with the exception for gold. To read my analysis on 9 Nov, please go my facebook page: https://www.facebook.com/Senses.Live/

From the look of things during the campaign, the wind seemed to be blowing in Hillary Clinton’s favour, and most of the FS masters’ analysis favoured Hillary Clinton as well. Hmm…… why?

To help readers who are non BaZi students understand what I was analyzing:

These are certain aspects we looking for when someone plans to become a president or a minister. Their charts should have: 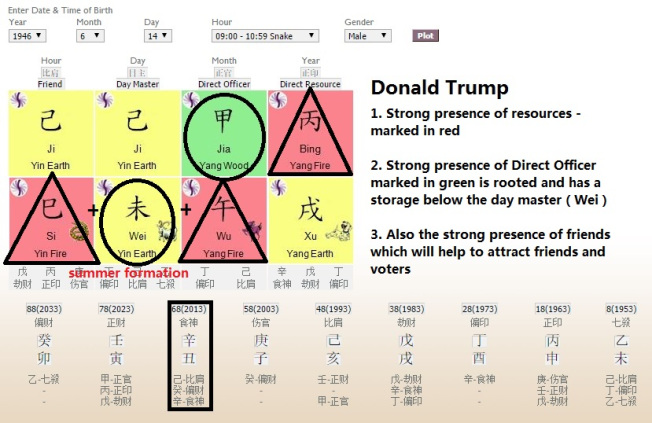 He is born with a strong Yin Earth 己 day master supported by strong fire elements 巳午, a summer formation under the principles of the four seasons. He has a special formation:  no amount of water will drown this chart or create a muddy field. This is a desert, there is not a drop of water in this chart. It is dominated by fire and earth elements only. So how is that single 甲 wood element ( symbol of a tree ) going to survive in this hot desert? Fortunately, the storage of this wood energy is found in the 未 element. This is probably why he has been a leader, a successful billionaire businessman and also a celebrity with a popular reality TV show. How could he have succeeded in getting such fame and recognition, unless of course the wood elements in his chart are rooted! In his chart, he has both types of  Wood elements甲/乙. 甲wood being his 正官Direct Officer represents integrity, recognition, self discipline, desires to control ability to comply with the law and regulations etc. While乙wood element being his 七杀7 Killings  represents his inclination to be a risk taker, ability to endure hardship, an influencer.

His current 10 year luck cycle of Xin Chou 辛丑 – Metal and Earth elements when combined with 巳 Si element brings a strong presence of metal energy which is useful for his creativity, multi-talents, boldness and career. The Fire Monkey year, Bing Shen 丙申 further enhances his chart as Shen 申 is a metal element. The presidential election result speaks for itself.

The 丑 Chou element in the luck cycle clashes into his day pillar – 未 Wei element( storage for wood elements ) adds strength to the wood elements in his chart which is beneficial for his power, leadership and recognition.

Overall, it appears that Donald Trump is not a dangerous man. The 辛 metal element in his luck cycle being his 食神 Eating God will guide him towards being more thoughtful and perhaps a better strategist. He knows the consequences of his actions. On top of that the strong fire elements in his chart will help tame the metal elements which dictates his speech and actions. Will he get carried away by his power due to the strong presence of wood elements? Unlikely, as wood will add strength to the fire elements in his chart while fire will forge the presence of metal elements will help to trim any unruly behaviour, if any. 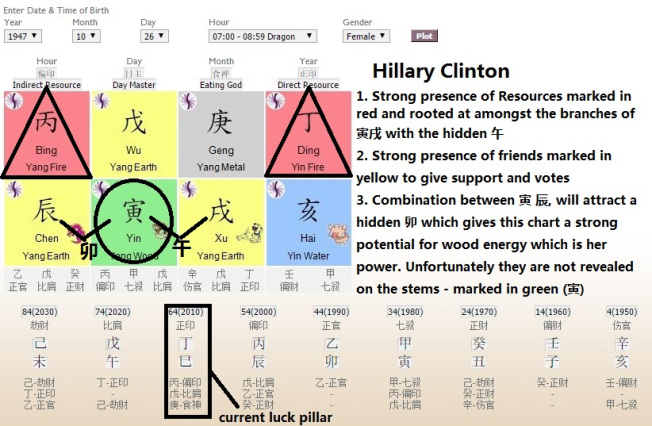 She is born a Yang earth 戊 day master but not born timely in season. Three out of four pillars in this chart is Yang, suggesting that this a woman who thinks and acts like a man, with very masculine energy! Fire element is an essential element for an earth person to be strong. A weak day master is not capable of handling power and runs the tendency to misuse or manipulate. In Hillary’s chart, there are two fire elements – 丙/丁 standing on both the year and hour pillars. The potential combination that brings strength to fire can be seen amongst the branches in her chart Yin Xu寅戌. This brings comfort to this cold late autumn chart as fire elements are her resource elements.

Her desires to be to a leader can be seen in her day pillar Yin 寅which is her 7 killings 七杀 element. But unfortunately, there is no wood element standing on the surface of the chart. Only fire 丙丁 and metal庚 elements are present. She is better off a leader or strategist behind the scenes. A president needs to have his/her power elements standing on top of the chart and well rooted so that everyone can see and recognise this person as a leader. She is definitely the president at home! ( Yin寅 is in her home palace ) The potential combination of  Yin寅 and Chen辰 gives strength to her power elements – Jia甲 / Yi乙 but since she is born in the late autumn, it is difficult for wood elements to survive in this season – Metal is strong during autumn. Plus, metal cuts wood! Hence, it is difficult to see power being useful in this chart.

Her current luck cycle Ding Si 丁巳 brings penalty to the tiger ( Yin 寅) in her day pillar which is not desirable for leadership or power. More likely to bring about grievances and unjust feelings / feelings of betrayal. The Fire Monkey year – Bing Shen 丙申clashes with the tiger寅 and adds weight to the penalty with the formation of Yin Si Shen 寅巳申 – Triple penalty 三刑!

As mentioned above, it is preferred that the element of direct officer 正官 is strong and prominent in a BaZi chart for anyone who desire to become a president. The weakness of wood elements in Hillary’s chart can only be strengthened during the wood luck cycle. If only she was running for presidency during her wood luck cycle of Jia Yin 甲寅 or 乙卯 – age 34 to 53, she may stand a chance to be elected. Too late Hillary!

Therefore, according to their BaZi charts, Donald Trump would appear to be a better president than Hillary Clinton because he has all the elements to lead, drive and strike a balance without ambitious hidden agendas, like an open book. Time will tell if this comes to be true.

It may be interesting to take a look at Michelle Obama’s chart and see if she is cut out to be a president someday? I’ll attempt to analyse that for my next post ?