On the 12 of June 2018, Singapore has provided a great Feng Shui environment besides the huge sum of money to host the U.S.-North Korea summit.

It has been an interesting time for me to observe the behavior pattern of the two leaders from such a diverse cultural background and upbringing. Not too long ago, they were still quarreling and calling each other names. And now, they have chosen to seal the deal on this auspicious ground. This is how a peaceful environment can shapeshift and transform difficult situations and people!

Let’s take a look at their Bazi charts and explore a little more about these two leaders: 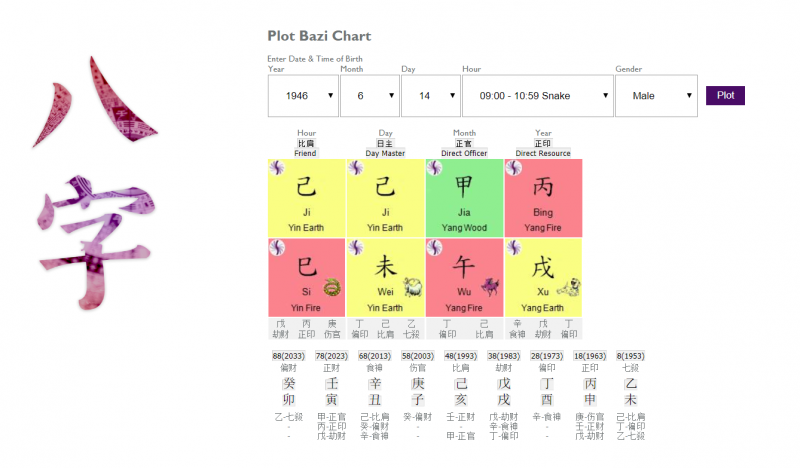 Both presidents have their Direct Officer 正官 located in the Month Pillar indicating power and authority. Hence, this is why they became the presidents.  But who truly has the power or uses the power for better gains?

According to BaZi principles, the one who can use their power element has to be born in the month that supports the element of their Day Master. In this case, Trump being an Earth day 己 master was born during summer – Fire element which is a resource element to him not to mention that he has the entire summer season in his chart as indicated in the Month, Day and Hour branches. Kim is a Fire 丙 day master, born in winter when fire is at it’s weakest point. Both water elements from the Year and Month stems are sitting on the earth elements which indicates the water is already muddy. Hence, a man with little or no integrity. His power elements will not be as useful or strong as compared to Trump’s.

Looking at the luck pillar 辛丑 for Trump, he is currently riding on the wet earth which becomes a favorable condition for his power element Jia wood at the month pillar. This wood element will thrive with the support of water!

Kim’s luck pillar 丙辰 is messing up his Year and Month Pillars. The clash onto his Year Pillar indicates headaches and the destruction of elements on the Month Pillar indicates chest or heart related issues. The head and heart are in turbulence, it is unlikely that he is able to make decisions that will be favorable or wise during this period.

I am also amused by their awkward gestures and body language when they were walking together and when the agreement was signed, as seen here. From the Face Reading perspective, both have given away their strengths and weaknesses.

The tapping on the shoulders and hands can indicate: “Pay attention!”, “I am telling you” or “Move on!”. Crossing or contact with both feet indicates the need to be connected or lack of confidence while sitting with legs apart clearly shows stability, confidence and power.

Power can be useful in the hands of the right person, changing the world. Power can be intimidating even when faced by a dictator. Like the saying goes in Chinese – 一山还有一山高 ( There is always a mountain higher than the other mountain ) Moving forward, let’s see if this investment from Singapore will change history.