Fu Yin and Fan Yin BaZi charts can be intimidating when one lacks the knowledge about it’s effects. The Fu Yin 伏吟 charts are those who have the same set of heavenly stems and branches visiting the chart . For example, if you are a Geng Yin 庚寅 day master, during Geng Yin 庚寅 year, it will affect your day pillar. Fan Yin 反吟 charts are the sets of heavenly stems and earthly branches that clashes with your pillar. For example, Geng Yin 庚寅 day masters meeting Jia Shen 甲申 year will experience a Fan Yin effect

Fu Yin and Fan Yin On A Weak BaZi Chart

Fu Yin 伏吟 can be good if you are a weak day master since these are likely to be your favorable elements. It carries the impact of doubly good ( when favorable ) or doubly bad ( when the elements are unfavorable ) during this period. There are people who became a million while loosing someone close or falling ill at the same time. Most of the time Fu Yin 伏吟 and Fan Yin 反吟 charts brings more health and relationship issues than anything else. It’s worth paying extra attention during the year before it happens. 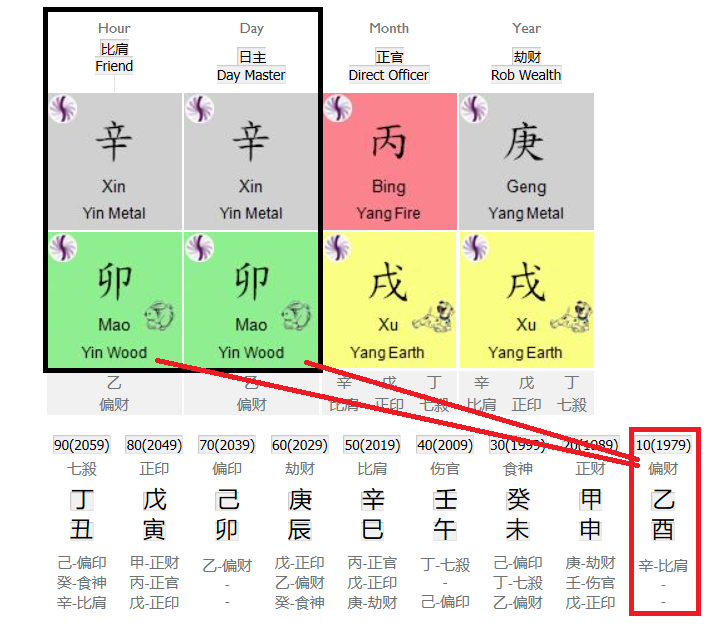 For the weak day masters, watch out on the years when the chart has a Fan Yin 反吟 effect. For example, in the case of a Xin Mao 辛卯 day master, seeing another Xin Mao 辛卯 at the hour pillar has a Fu Yin 伏吟 effect. During the Yi You 乙酉 luck cycle, both day and hour pillar goes into Fan Yin 反吟 effect. Depending on the elements that dominates the chart. A person can suffer from severe mental issues if the chart is dominated by 7 killings 七杀 while there is a lack of Eating God 食神 regulating it. Quite likely this is a control freak and thinks that world is against him. The worst case is when the chart is contaminated, for example, weak Gui 癸 water day master meeting Ji 己 earth.

During the Fu Yin 伏吟 or Fan Yin 反吟 years, it is advisable to lie low and avoid conflicts or major change of plans. Unless you are confident that your chart has what it takes to negate or reduce the impact of these influences. Perhaps learning to accept things the way it is comforts the mind.